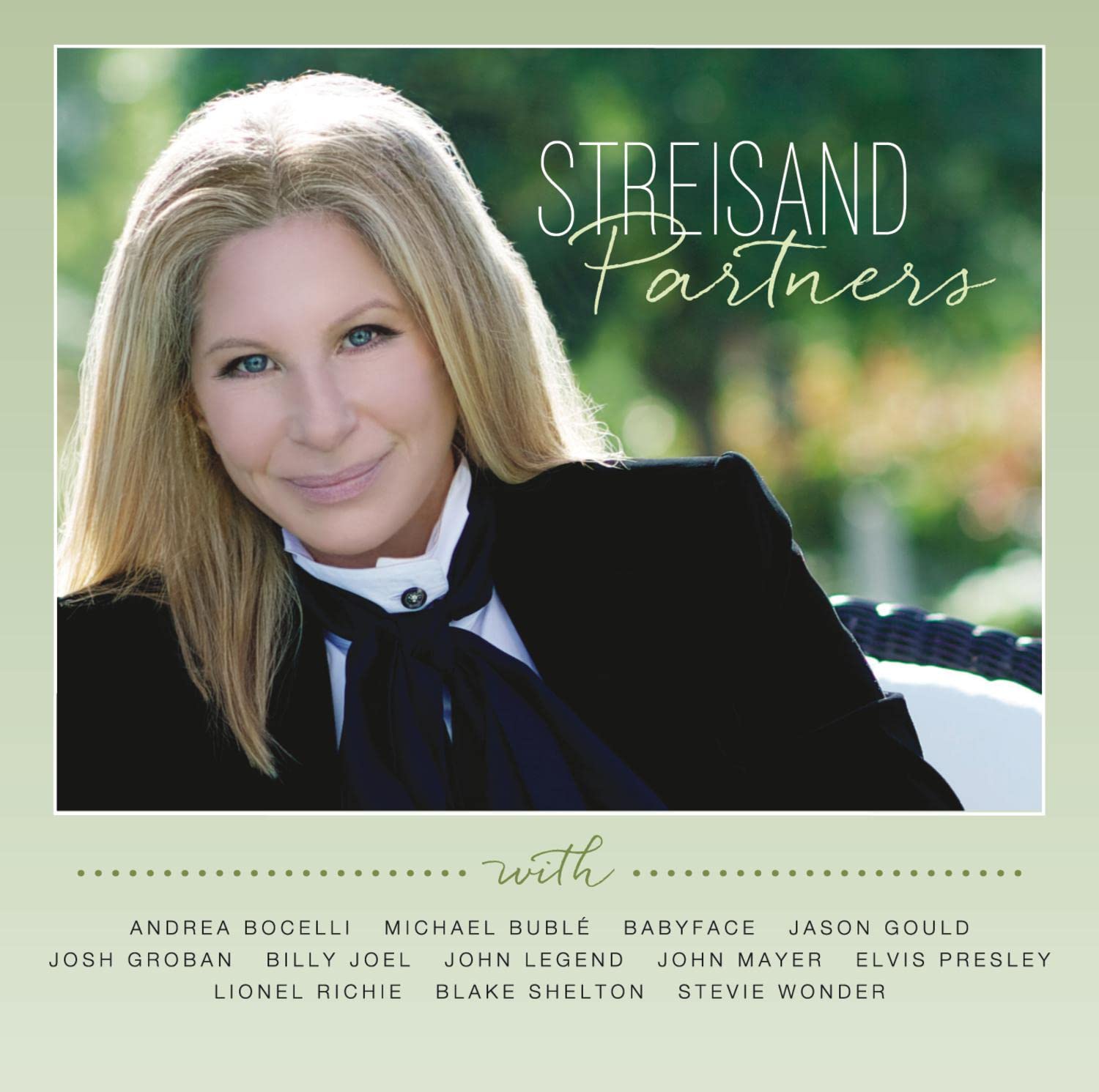 "Partners" is Barbra Streisand's new album, featuring 12 inimitable new Streisand duets with the world's greatest male vocalists. This is the legendary artist's first duets album in more than a decade, and debuts new studio recordings of Streisand classics and others songs.

"Partners" is comprised of 12 songs, many of which are regarded as Streisand classics. Among the songs included are "New York State Of Mind," with Billy Joel, "Come Rain Or Come Shine," with John Mayer, "Love Me Tender," with Elvis Presley, "The Way We Were," with Lionel Richie, "What Kind Of Fool," with John Legend, "People," with Stevie Wonder, "I Can Still See Your Face," with Andrea Bocelli, "Evergreen," with Babyface, and Ms. Streisand's first studio-recorded duet with her son Jason Gould, on "How Deep Is The Ocean."

Ms. Streisand is currently the best-selling female recording artist in history and the only woman to make the All-Time Top 10 Best Selling artists list. She has recorded 51 gold, 30 platinum and 13 multi-platinum albums in her career, including nine #1s, and is the only recording artist to have accomplished #1 album in five consecutive decades. Recognized as an icon in multiple entertainment fields, Ms. Streisand has attained unprecedented achievements as a recording artist, actor of stage and screen, concert performer, movie producer, film director, author and songwriter. In her accomplished career she has been awarded two Oscars, five Emmys, ten Golden Globes, eight Grammys, a special Tony award in 1970 as star of the decade, and two Cable Ace awards the only artist to receive honors in all of those fields of endeavor. Ms. Streisand is the recipient of the American Film Institute's Lifetime Achievement Award, the National Endowment for the Arts Medal, two Peabody Awards, A Grammy Lifetime Achievement Award and a Grammy Legend Award. Ms. Streisand is also the first film director to receive the Kennedy Center Honors.

We're catalyzing Canada's transformation to a vibrant and sustainable future.

We work together to advance research, scholarship and innovation, create authentic learning experiences and inspire careers of the future. Join us as we:

Prepare students to make a difference in a changing world through innovative curricula and authentic learning experiences.

Play an integral role in, and learn from, the cultural fabric of Calgary and the communities we impact.

Transition to a career in tech through our professional graduate programs, and join forces with over two million Canadians helping evolve our digital economy.

Get a personalized assessment of how your education and experience fits within our program's admissibility requirements.

Our Master of Information Security and Privacy brings cutting edge information together with real world scenarios.

The Undergraduate Science Centre (USC) is the home of all undergraduate student support in the Faculty of Science: Science student advising, program coordination, the Science Internship Program, Science Engagement programs and student events. Resources, support, and advising are all provided remotely.

As part of a recent reorganization within the Faculty of Science,. the Graduate Science Centre has been created for graduate student support and services.   View current graduate programs, important dates/deadlines, forms and documents, and and contact information for your questions.

Learn how to give

Catch up with the latest alumni news, and learn something new in the latest issue of Alumni Connections

Class of 2021: Meet our fall 2021 Order of the University of Calgary recipients

Honour recognizes record of exemplary and distinguished service to the university  ...

Embracing the unexpected: Fall Class of 2021 grads share the most surprising thing they learned during their UCalgary studies

Favourite campus spaces: Fall Class of 2021 grads share the space on campus that they’ll come back and visit

In the News: Lethbridge Herald

In the News: Vice.com

In the News: Livewire Calgary

In the News: Vice.com